You are here: Home / Temple Visit in Los Angeles 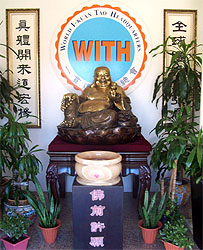 Last two weeks I traveled through the United States. One of my destinations was Los Angeles. Since the temple of the ‘Great Tao Foundation’, where the Tao meetings that I weekly follow online are held, is located there I contacted Derek Lin to see the possibility for a visit.

I received an inviting reply by email that Sunday 14 October – the day I had planned for my visit – there was a meeting as usual and it was open for me to visit. Every week there’s also a vegetarian lunch and a midday ritual after the meeting and when I asked if I could participate in these the answer was that it’s open for everyone. Also Derek asked me if I would like to make use of the opportunity to go through the initiation ritual as I follow the weekly meetings already for some time now. After confirming what this ritual exactly means – showing that you’re willing to follow the Taoist path (Yiguan Dao/I-Kuan Tao) –I replied that I gladly would use the opportunity, because its principles correspond with my own ideas.

Sunday 14 October the day was there. Derek Lin offered me to pick me up as I stayed in West Hollywood while the temple is in El Monte (a challenge to reach by public transportation). Thus I met Derek and his wife Janice. It felt like I’ve known them for longer from the start. In that day’s meeting Derek called it karmic affinity: one day you pass someone without knowing who it is, the other day you meet someone from the other side of the world that you (learn to) know. The weather was, like always in Los Angeles, wonderful and on the way to the temple I told them about my traveling so far (New York, Washington and Las Vegas).

In the temple I was welcomed by a cheerful Buddha and I met a dedicated volunteer whose name I unfortunately forgot. We made some pictures and then I got a tour through the temple. It’s a rather small building, but from the outside it’s clear that it’s a temple and also on the inside it’s well decorated. In the conference room there are paintings of Fu Xi (author of the Yijing/I Ching) and Kong Zi (Confucius). Then there’s the temple room with a shrine and on it the lantern with the Chinese characters wuji (‘without boundaries’). Additionally it’s decorated with a laughing Buddha, Maitreya Buddha, Guan Yin and the enlightened Buddha. It’s important, as Derek describes on his website, to keep in mind that these are not the central focus of the shrine, but that they serve as reminders for us to always keep their teachings in mind, such as: tolerance, an open mind, cheerfulness, generosity, etc.

Somewhat later, after everything was prepared (including the colorful construction of building blocks for the webcam) and I met some other people, the Tao Meeting started. Chapter 79 of the Daodejing (Tao TeChing) was discussed, about the honoring of agreements and not enforcing this from others, and the term ‘dragon’ was explained from chapter 1 of the Yijing (I Ching): “Flying dragon in the sky”. In the West the dragon has a negative image, but in China it stands for power and fortune. Derek said that the flying dragon in the sky is a symbol for something that brings prosperity to multiple people, like rain clouds can help the farmers with their harvest, and it should be our goal to bring fortune to others.

Usually the initiations are after the lunch, but as master William Kuo, who would execute these, would attend the opening of a shrine in a martial arts school that afternoon, it was moved to before the lunch. We went to the temple room and there I met a young lady who attended the meetings for some time now and would like to be initiated as well.

While Derek explained what was happening, everything was performed in Chinese, the voluntary members prepared the shrine with an invitation ritual. Then Derek had to come forward as the instructor that introduced me and the other candidate to promise that he brought us here to seek the Tao (literally: Way/Path) without any hidden motives. Then Janice had to come to make the same promise but then as our guarantor for our good name, that we were there without hidden motives. After that we went to the shrine to confirm we would sincerely continue our spiritual path and respect our guides/teachers. After our confirmation we received the Three Treasures of Yiguan Dao to help us on our way which are: the Mystic Portal, the True Sutra and the Hand Seal.

The initiation ended with an explanation of the Three Treasures by Derek. I got two books on Yiguan Dao and its rituals from master Joseph Chen. Then it was time to enjoy the vegetarian lunch. The food was already cold, but the warm company of Derek, Janice and two others compensated this.

I was brought back to my place. After saying goodbye to Derek and Janice I felt cheerful and blessed by this special experience. I was always taught that only those with the true faith are really liberated. I can only say that in my opinion it’s not about what one believes, but how, that is: with an open and sincere mind that seeks Love for everything and everyone. That is something Derek and Janice understand and live and I hope to meet these wonderful persons again in future.

Posted in Initiation
← Previous Next →