You are here: Home / The Shrine 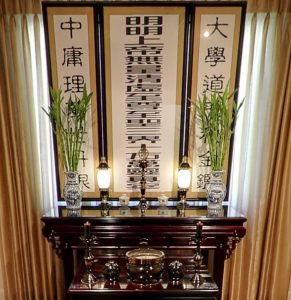 The meaning of the shrine starts with the recognition of oneness. The idea is that we human beings may have many different names for the divine, but all these names are ultimately varying descriptions of the same thing – the one great spiritual truth – that which we cannot comprehend fully, and yet makes us resonate so powerfully in the deepest core of our being.

The most important thing in the altar is the flame. It can be called Buddha Light or Mu Light. Either way, it’s a representation of the Tao. Because the Tao is the ultimate force or principle rather than a father-figure supreme being, I-Kuan Tao represents it with fire instead of some human visage. No human likeness or material symbol can capture the essence of the Tao. Fire, the ethereal manifestation of energy, is a far better symbol than anything human beings can craft.

There is a small metal plate behind the flame, which cannot be seen in the web representation. It has the Chinese inscription wuji, which literally means “without boundary” or “without limit.” We can translate it as “infiinity.” When the flame is lit it casts a shadow of this inscription, thus reminding us that the infinite variations of creation are but myriad reflections of the Tao.

The central text behind the flame can be roughly translated like this:

Remember: the names may vary but the essence remains the same.

In a typical I-Kuan Tao shrine there are also figurines arrayed in front of the Mu Light. The Maitreya Buddha is always in the center position. He may be accompanied by Chi Kung, the Living Buddha; Guan Yin, the Bodhisattva / Buddhist Goddess of Mercy; Guan Gong, the God of War.

The important thing to keep in mind is that these are not the central focus of the shrine. They serve as reminders for us to always keep their teachings in mind, and we honor them for the virtues they embody, such as tolerance, an open mind, cheerfulness, and generosity (Maitreya); justice, fairness, honor, courage and loyalty (Guan Gong); compassion, giving, caring, and nurturing (Guan Yin).

The Mu Light is the central focus and the most essential part. Indeed, senior masters of I-Kuan Tao have remarked that in times of war, chaos or strife, when it is not possible to create the shrine completely, a single lit candle with nothing else is entirely sufficient to serve as the representation of Lao Mu / God / the Tao.