Published by Cultivator on December 27, 2016 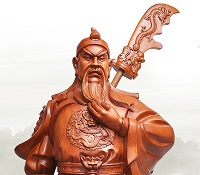 關聖帝君 Guan Sheng Di Jun is one of the deities venerated in the I-Kuan Tao religious practice. He is well known to the Chinese, and his name and legendary tales have spread to Korea and Japan, but outside of Asia he is relatively unknown.

The virtues Guan Gong personifies — honor, loyalty, integrity, justice, courage, and strength — are ideals that can really impact us in these modern times. Think of the severe lack of honor we have all seen — from the dishonest lawyers and corrupt politicians to the petty losers who hide behind the anonymity of the Internet to spew hateful prejudice against certain groups of people. Such people and their behaviors are antithetical to Guan Gong.

In the West, those who know Guan Gong sometimes call him the God of War. This idea comes from the fact that Guan Gong is the most famous general from Chinese history. In battles he invariably dominated the field as the most powerful, most skillful and most courageous warrior, as well as an able leader and tactician.

Guan Gong’s appearance was distinctive. His red complexion and long beard stood out immediately, as did his unique weapon — a great blade mounted on a long handle — that never left his side.

Why was his face red? Some say it was a manifestation of his righteous anger. Others relate the story that his complexion changed after he slew a bullying magistrate for molesting a girl. This change allowed him to get past the guards unrecognized, thus escaping the city and beginning his adventures. Either way, his primary drive was to enact justice and to help the common people, and his face was an unambiguous, unmistakable physical emblem of this.

Although there are many legends attached to Guan Gong, he is not a mythological figure, but an actual person from history. He lived in the period of the Three Kingdoms, a time of civil strife seventeen hundred years ago. We know of Guan Gong’s exploits primarily through the historical novel San Guo Yen Yi, known in the English-speaking world as Romance of the Three Kingdoms.

“Gong” means lord, an honorary title, while “Guan” is the surname. Therefore Guan Gong means “Lord Guan” — a title he earned through his deeds. His actual name was Guan Yu. This was the name with which he began his military career.

Guan Yu served with Zhang Fei, another great warrior, under Liu Bei, one of the foremost leaders in the Three Kingdoms period. The three of them swore an oath of loyalty and brotherhood to one another. Thereafter they referred to each other as brothers, even though they weren’t related by blood. To the Chinese, such an oath was not to be taken lightly, because it committed one to a lifelong bond that was just as strong as blood ties.

Another pivotal figure from that historical epoch is Cao Cao (pronounced like “Tsao Tsao”), a ruthless schemer. He admired Guan Yu’s abilities and principles and wished to recruit him for his own cause, but Guan Yu remained steadfastly loyal to Liu Bei. For a while, when the tides of war separated Guan Yu from Liu Bei, Guan Yu agreed to serve in Cao Cao’s army. He made it clear though, that it was a temporary alliance, and he would rejoin his brother at the earliest opportunity. Cao Cao agreed to this condition.

While under Cao Cao’s employ, Guan Yu was still relatively unknown. The war was in its early phases and he kept a low profile, until one day…

Cao Cao and his allied lords came across a difficult obstacle: Hua Xiong, a powerful enemy general who taunted them and challenged them to pit a champion against him in single combat.

Upon Hua Xiong’s challenge, Cao Cao’s allies sent forth their best warriors, but they were no match against him. Each suffered defeat after several rounds of one-on-one duel. And with each defeat, the morale of their soldiers sank lower and lower. Hua Xiong seemed unstoppable, and the lords were out of ideas. They looked at one another, feeling helpless, when a voice rang out:

“I shall go take Hua Xiong’s head and present it at your feet.”

They turned to look at the speaker and saw that he was nine spans tall, with a beard two spans long. He had slanted eyes and thick eyebrows; his face was a dark red hue, his voice was like a giant bell. Before the tent he stood.

Yuan Shao asked who he was. Gongsun Zan reported: “This is Liu Bei’s brother Guan Yu.”

At this, Yuan Shu roared: “Is he mocking us for not having great warriors? He is only an archer, how dare he speak such nonsense? Beat him out of here!”

Cao Cao hastily intervened: “Please calm thy wrath, lord. This man utters boastful words, and so must possess some courage. Let’s try sending him out. If he does not win, then it won’t be too late for us to discipline him.”

Yuan Shao said: “If we send an archer into battle, Hua Xiong will surely laugh at us.”

Cao Cao countered: “This man’s appearance is uncommon. How can Hua Xiong tell he’s an archer?”

To all of this Guan Yu said simply: “If I fail to win, please cut off my head.”

Cao Cao ordered a pot of heated wine, to drink with Guan Yu for luck, before he mounted his steed, but Guan Yu said, “Set the wine down. I shall go and come right back.”

He exited the tent, lifted his great blade, and vaulted upon his horse. Presently the nobles heard loud drums out in the field, as if the sky was falling, the earth sinking, the hills shaking and mountains collapsing. Everyone was startled. Just as they were about to ask what was going on, they heard the sound of approaching horse bells. Into the center ranks galloped the horse, with Guan Yu riding and hoisting aloft Hua Xiong’s decapitated head. He threw it down to the ground.

His wine was still warm.

Now you can see why Chinese people consider Romance of the Three Kingdoms a classic. Perhaps one day, it can be better known in the English-speaking world.

At a superficial level, Guan Gong’s appeal seems to be his superb martial prowess. But if you look more closely, you can see what makes him different. He was not a show-off. He had no need to flaunt or draw attention, preferring to let his actions speak for him instead.

With such a mindset, Guan Gong was content to remain in the background until the situation required his involvement. And when it did, he took the most effective action in the least amount of time with minimal fuss. Chest-beating, saber-rattling and humiliation of one’s opponents are simply not part of the equation. Such are the ways of the ultimate Taoist warrior.

Luck is not part of the equation for the true Taoist warrior. When Cao Cao wanted to drink with him for good luck, Guan Gong declined. He preferred to trust his own abilities over the quirks of fate. To drink before the battle was merely an unnecessary adornment that got in the way of dispatching the enemy in the most expeditious manner possible.

After this and other military victories, Cao Cao lavished Guan Gong with gifts and honorifics in an attempt to win him over. He held banquets and feasts in Guan Gong’s honor on a regular basis. Guan Gong was unmoved. When Cao Cao presented him with shiny new robes, Guan Gong chose to wear the new garment inside and his old frayed clothing outside. Why? Because the old attire was a gift from his brother Liu Bei and he could not allow the new present to eclipse the old.

Yet another aspect of Guan Gong that the Chinese admire is that he valued intangibles — sentiments, friendship, fidelity, brotherhood — far more than material things. As soon as he learned of Liu Bei’s location, he made his departure, exactly as he originally stipulated. He left behind a room full of gold and treasures Cao Cao bestowed upon him because they meant nothing to him. For services rendered, he took with him only one gift: a magnificent steed by the name of Red Hare.

Ultimately, Guan Gong was a warrior for peace. He pledged his allegiance to Liu Bei because of their shared ideal: to restore peace for all and end strife for the common folk. His loyalty was rooted in protecting the people. His numerous wartime achievements made him a favorite patron saint for all military commanders and soldiers since his time, but he would be an odd choice as the God of War indeed, for he waged war for the sole purpose of ending it.

There are other famous warriors throughout Chinese history, but they do not receive the same veneration as Guan Gong. For instance, Yue Fei, the epitome of the patriotic warrior from Chinese history, was also supremely skilled in battle and loyal to the last. He is just as well known as Guan Gong, and there is no doubt that the Chinese have a great deal of respect and fondness for him. But Guan Gong is the one with hundreds of thousands of temples throughout China. His virtues — honor, loyalty, integrity, justice, courage, and strength — are more powerful than any weapon, any army, and any martial prowess. Wars come and go, but principles endure.

Now is a great time for us to get acquainted with Guan Gong. At the dawn of the new millenium, facing the unknown challenges of a fast-changing world, we need the inspiration of Guan Gong’s power and character more than ever.

Posted in Divine Beings
← Previous Next →