You are here: Home / Maitreya Buddha 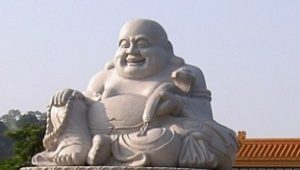 彌勒佛 The Maitreya Buddha is a figure that just about everyone recognizes on sight. Some know him as “Fat Buddha” or “Happy Buddha.” Many mistake him for Gautama Buddha, the founder of Buddhism. Relatively few in the West know the Maitreya name, and even fewer know who he actually is.

It’s a bit strange when you think about it — this combination of universally recognized image and virtually unknown name. It’s unusual and unique among all the religious figures one comes across in America.

We see Maitreya Buddha all the time at the Temple. He occupies a central position in our shrine. His name, in Chinese (pronounced like “mee luh”), is in our rituals. Does that mean we at the Temple are of the few who really know him? Well, not necessarily.

It’s one thing to know the Maitreya Buddha name, in whatever language, and quite another to understand the meaning he symbolizes in Chinese culture. When I ask our group to explain this buddha, the answers I get tend to be on the superficial and obvious side, such as “prosperity,” “wealth,” “good luck,” and “no worries.” One person even offered “fertility,” since some women supposedly rub the buddha’s stomach in the hopes becoming pregnant soon.

These are all good answers, for they all describe aspects of the Chinese conception of the Maitreya Buddha, but they miss the one principle that lies in the center of it all. To the Chinese, the core of Maitreya Buddha is the concept of generosity.

(Please be aware that what we’re discussing is an aspect of Chinese culture and not necessarily Buddhism. In authentic Buddhism, Maitreya Buddha is the “future buddha,” the one who will come in the distant future to revive Buddhist teachings and bring an end of suffering. All the additional attributes we’re talking about originated from the “Cloth-bag Monk,” a buddhist monk who lived in China about a thousand years ago and who the Chinese regarded as the earthly incarnation of Maitreya. Because of this belief, the corpulent image of the Cloth-bag Monk replaced the first image of Maitreya Buddha in China, but in other parts of Asia the original, much skinnier image of the Maitreya endured until today.)

Now we begin to get beyond the superficialities. It is precisely because “stomach capacity” is the Chinese way of expressing one’s capacity to give and to forgive, that the ancient Chinese chose to fashion this buddha with the obviously huge stomach. What better way is there to symbolize limitless tolerance and generosity?

Note that generosity in this context isn’t limited to the material aspect of charity. It also applies to the non-material realm. For instance, how generous are you when it comes to praising others for the good things they have done? Do you give praise freely in recognition of their achievements, or are you a miser when it comes to compliments, giving a few every now and then and only grudgingly?

All other attributes of Maitreya Buddha flow forth naturally from this one central concept. Why is he so happy? Because he is tolerant of everything and won’t hold a grudge against anyone. Why does he represent prosperity? Because his big heart gives generously and therefore receives abundantly as well.

The order of the above is important – in this case, syntax is everything. You must attain a state where you can give without any expectations of returns or recognition before you can be ready to receive the bounties that life has to offer. It doesn’t work the other way around, as so many of us unconsciously believe.

In that mindset, it’s sort of like, “I’ll start giving to family, friends and charity when I win the Lotto.” Wrong. This universal mechanism, this Tao represented by Maitreya Buddha, says you have to start giving first and expect absolutely nothing. In all likelihood you still won’t hit the next jackpot, but you will, with unconditional certainly, win the grand prize of life.

I’m fond of saying that it is as if there’s a door in the heart which opens outward. Traffic through it is two-way – you give and receive through the same door. In generous people the door is wide open; in the not-quite-so-generous, the door is slightly ajar. The degree to which the door opens determines the degree of abundance and prosperity in your life.

Think about the stingy people you know. They give little because the heartdoor for them is open only a tiny bit. Do they have the ability to receive abundantly? Not really. If you try to give them too much, they get uncomfortable or suspicious or both. You may even inadvertently force their doors to close up a bit more than before. And what about the people whose doors to the heart are completely closed? They give nothing and have no ability to receive anything.

The tricky thing about this door is that you have no manual control over it. You can’t open or close it when you want. The only way to open it more is to give more than you normally give, to force it open with an outward flux. Once it is wide open, you’ll literally have no choice but to enjoy the inward flux of abundance, both material and spiritual.

Next time you see Maitreya Buddha, let it be a reminder for you, as the ancients intended, that the spirit of generosity leads to abundance and happiness. This is a powerful teaching hidden in plain sight. Our ideal is to follow this teaching all the way to buddhahood, when the heartdoor is taken off its hinges. In that state of true enlightenment, you and I will give everything without a second thought… and receive the universe.

Posted in Divine Beings
← Previous Next →