You are here: Home / My Journey 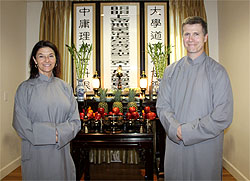 2005 was a difficult year. The business I started 13 years before was essentially ejected from its location and my wife and I did not know what to do next. In 1992 I started a gym in West Hollywood, California and began to explore the fusion of martial arts and fitness in a new context. I wanted to merge the eastern arts – rich in philosophical value with western sports science. In this gym I tested the concepts and curriculum, met my wife and launched a separate martial arts school within the facility. I was fortunate enough to train many celebrities and expose a western audience to some of the eastern values I held so close to my heart.

However, in 2005 one chapter closed and another opened. At the time I was terribly disappointed in the turn of events that transpired. The martial arts school within the West Hollywood gym was getting too big for the facility to hold. My wife and I were told that we would have the option of purchasing the gym from the owner or “get out”. When we tried to buy the facility we were given an outlandish price, which was far beyond reason, so we had no real choice but to leave.

Around the year 2000, my wife and I developed a concept and wrote a business plan for a facility that merged eastern tradition and western technology. We wanted to create a facility where participants integrated mind, body and spirit in a positive environment with like-minded people. And we wanted our connection to the eastern traditions to be as authentic as possible.

In 2005 while all of these issues were arising with the gym, I was searching for a Taoist teacher and had received multiple recommendations. I had been a professor at UCLA for 10 years specializing in eastern philosophy, kinesthetic learning strategies and martial arts – so I was no stranger to the eastern wisdom traditions. As I explored the recommendations, I also decided to perform an Internet search to see if anything came up in the Los Angeles area. The first site that came up was Taoism.net which is the site associated with the I-Kuan Tao Temple in El Monte, CA. I looked at the schedule and saw there was an English-speaking class the following Sunday. That weekend my wife and I visited for the first time. After attending the first class we were invited to participate in the ritual, and were initiated immediately afterward.

My wife and I were both raised Roman Catholic but had felt no real connection to the religion for some time. I felt the limitations and restrictions – particularly those which implied Catholicism was the only path to God, couldn’t possibly be valid. When I heard the philosophy of the Tao – the ultimate source and how it can be expressed in many ways, across cultural boundaries I felt an innate sense of truth. My wife is Native American – she felt the Tao philosophy closely paralleled the path of the indigenous people of the Americas. This is why we chose to be initiated so quickly after coming to the temple.

As I mentioned before, 2005 was a turning point. We moved out of the facility I started 13 years before. The concept we developed in 2000 of a center devoted to the merger of eastern tradition and western sports science was high on our agenda. We hired consultants and put a substantial investment into the development of a business plan to launch the facility. After shopping the plan to multiple investors we finally came across an investor from India who was quite receptive to the idea. We had a series of meetings with he and his board members and were told that his attorneys would be drawing up papers to finalize the deal. A week later we were informed that he had decided to fund a motion picture instead of our facility.

At this point I felt defeated. We live about 30 miles north of Los Angeles in a suburb called Santa Clarita. In 2007, with nowhere to go, we decided to open a small studio (1360 square feet) a short distance from our house. I continued to teach at UCLA and work with the other students in West Hollywood at another gym – and started over – it was my wife, four walls and I. The only students we had were a few friends of our children who played sports together.

The Masters from I-Kuan Tao came to our small facility and gave us a custom painted and framed image of “Tao” and a statue of Guan Gong. They gave a blessing, wished us the best of luck and Master William even offered business advice and reduced printing costs to help the start up business.

In 2008 the USA went into the worst recession in the country’s history. Despite the economy’s terrible downturn, our little studio continued to slowly build students. By 2012 we had outgrown our current facility and were looking to expand to a slightly larger space. We initially looked around to rent additional square footage and were not having any luck. My wife suggested purchasing a property, but I hesitated because we really didn’t have the money to invest in ownership of a building.

One afternoon at the temple, Master William sat down with me and asked how we were doing. After listening to our story, he told us that he felt it would be wise to look into purchasing a property. I told him that we didn’t have enough money to purchase, but he insisted that it would be to our advantage to move forward and we would find a way. That gave me the confidence to find creative ways to move ahead. Now I must say, that my wife intuitively knew this before – and I ignored her, so I think there’s a lesson to be learned for me as well…

I decided to gather about 10 friends and students together to see if they would be interested in creating a partnership. Several members of the group were very interested, but then one particular student stepped forward. This student said that he and his family would like to fund the entire project for a percentage of ownership. In my experience, that type of angel investor doesn’t come along very often.

This wasn’t nearly the end of our journey. We went through so many issues with banks, and loans and construction! It took nearly two years to find a building, get financing and complete construction.

In April 2014 we opened Ekata Training Center, a 12,500 square foot facility dedicated to merging the worlds of ancient eastern tradition with western sports science. We offer all forms of movement training from Jeet Kune Do, to Muay Thai, to Brazilian Jiu-jitsu, to Qi Gong. We offer acupuncture, massage, child-care and even a study hall with free tutoring. We also have a juice bar that serves vegetarian snacks and drinks. Our mission statement is as follows:

Our mission is fuse ancient tradition with science and technology. We empower our members through physical expression thus opening the gateway to spiritual and mental health.

But I’ve saved the best for last. Since 2005, I’ve become close friends with our English-speaking teacher at the temple, Derek Lin. Through Derek’s selfless guidance and recommendations, I’ve structured the entire facility to be an authentic Tao center. Derek even came up with the name – Ekata, which means “Oneness” in Sanskrit. He and I have conversed through countless emails as I developed the concepts and curriculum that we now implement at the facility. While the facility is entirely secular, the lesson plans I’ve developed to teach character training for the children are based on the “Principles of I-Kuan Tao” because these universal guidelines appeal to everyone regardless of their religious affiliation.

The Masters and members of the temple even gave us the ultimate gift – a shrine. This shrine is where all meditation is taught. We’ve had an overwhelmingly positive response. We are not attempting religious conversion, but sharing principles that appeal to a western audience. Our western society is fraught with aggression, stress and fear. I feel our new approach to fitness and well-being might be an instrumental method by which principles of the true Tao might be introduced in a non-threatening manner.

We’ve always felt that it was important to have an authentic connection to the Tao teachings. This is why my wife and I were initiated to the temple and began to study the Tao with our Masters. We believe that bringing this authentic connection to Western society through our fitness center will increase interest in the teachings and help us integrate these practices into western life.

In 2013 we held a traditional Chinese groundbreaking ceremony with the help of temple members. It was a wonderful day, and many of our students and friends attended. Everyone enjoyed the ceremony, and then celebrated with traditional Chinese vegetarian food that was prepared by our friends at the temple.

In preparation for the opening of our facility, my wife and I took the Ching Ko ritual with Master Joseph Chen. We had both been vegetarian for some time, but the ceremony formalized our vegetarianism and prepared us to become owners of the shrine.

Grand Master Chen named our shrine “Chuan Chang” which means “the flourishing totality”. (The physical, mental and spiritual aspects of life) This is the perfect name for our shrine because our facility is designed to teach not only the physical aspects of health but how to improve the connection between the mind, spirit and the corporeal body, thus strengthening the jing, chi and shen.

On the day of the shrine opening, temple members worked with us to prepare all of the items needed for ceremony. Our friends from the temple brought absolutely everything that was needed to install the shrine, including the beautiful Mu light. Master William Kuo gave us implements for the shrine opening ceremony that he brought all the way back from Taiwan.

Master Joseph Chen officiated the Shrine Opening Ritual. Derek Lin provided a lecture about the Tao during the ritual. Once the ceremony concluded six people decided to go through the Tao initiation. I was very happy that six people who really knew nothing about the Tao felt so connected to this universal truth; so much so that they went through the initiation immediately.

Of course without our temple friends we could have never conducted such a beautiful and joyous celebration. We believe this was the start of a wonderful opportunity to share Tao teachings with citizens in our community.

Master William told us that when I-Kuan Tao started in China, a martial artist was instrumental in the growth of the movement on the mainland. We hope to provide the same catalyst in the US. There has been a wide acceptance of “mindfulness” practice to abate stress and improve health. We feel that by providing a family based series of activities that incorporate eastern health practices, philosophy, western science and universal spirituality we can help bridge the worlds of east and west.

Our journey is far from over. We opened this facility in an area that is very politically conservative. While Taoist philosophy is not well known here, we hope that the universal themes of family, compassion and service to others will help our efforts to flourish in Santa Clarita, and move beyond the boundaries of our single location. My wife and I believe that if this area in the US is receptive to the Tao message, it will be received equally well in other areas around the country.

So in closing, we owe a great debt to I-Kuan Tao, the Masters and our great friends Derek and Janice Lin. We’re so pleased that we have found other like-minded individuals with whom we can share this path. And we thank all those sages who have come before us from which we can learn these valuable lessons.

Posted in The Shrine
← Previous Next →